This is a sensor module containing a microswitch that is always ON. When the operating arm of the microswitch is depressed (eg, by coming into contact with an obstacle) it turns OFF It is an INPUT device.

The secret of a microswitch is that a metal common contact is moved at high speed between two other contacts by using a very small force on a pre-loaded spring that forms the common contact.

As the picture below shows, in the idle, or normal state, the common contact is completing the electrical circuit between pin 1 (digital signal) and pin 2 (Vcc – the Kookaberry’s operating voltage). The Kookaberry interprets this as “ON” condition.

When the lever arm is depressed the common contact moves from pin 2 to pin 3 which is ground and removes the Vcc voltage on the signal wire. The Kookaberry interprets this as “OFF” condition.

A red LED lights up on the crash sensor when the lever arm is depressed and the circuit is opened.

Where are these switches used in real life?

Microswitches are used in control circuits everywhere. Some applications are

Why is this microswitch called a crash sensor?

Imagine that it is mounted right at the front of a moving platform (like a model or real car) so that the first thing that makes contact when it get close to a wall or obstacle is the lever arm.

Now imagine that the power to the platform motor is dependent on the state of the crash sensor. Whilst the sensor is in its idle state (ON) the motor is ON. When the arm is depressed it is OFF.

That is why it is called a crash sensor……

How can the crash sensor be used to enhance lesson plan outcomes? 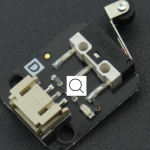 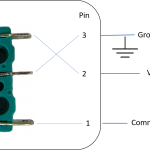