Tutorial: Getting Started with your Kookaberry

This tutorial will demonstrate how to turn the Kookaberry on, run an app and configure its ID and other parameters.

It is important to note that the Kookaberry does not have an on/off switch on the board. When the battery is plugged in, it is always ON until the power lead is removed. Even if the screen is blank, the Kookaberry is still powered ON.

Some functions such as moving the logged data into USB memory, require the Kookaberry to be turned OFF (ie, powered down).  In these cases, the power lead is simply removed from the battery and then plugged back in.

Turning the Kookaberry on and running an App

If an AustSTEM designed and 3D printed handle is available, push the Kookaberry into it with the screen facing forward, ie with the battery hole at the back. 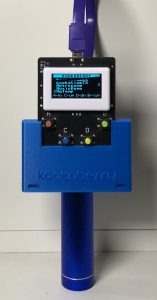 Connect the 5 Volt USB Lithium-Ion battery to the USB connector. A green LED should illuminate on the back of the Kookaberry indicating that the Kookaberry is now switched ON.

If a blue LED is pulsing slowly then the battery voltage is too low and the Kookaberry will soon become inoperative. 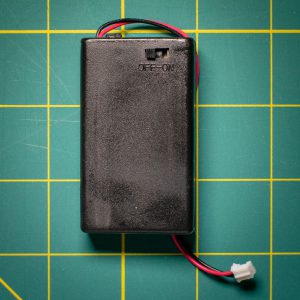 The Kookaberry can also be powered from a battery box plugged into the battery connector.

Start the Kookaberry’s Menu app by holding down the green B button whilst pressing the reset button briefly and the letting go. This activates the Menu screen on the display.

The Menu shows a list of the MicroPython apps that are stored in the Kookaberry’s USB memory.

Select the Kookaberry app that you wish to run by navigating up or down by pressing the C or D buttons respectively.

Press the B button to run the app.

Apps look for the values of basic parameters in the _config file at the head of the Menu list. These are the ID (name), logging interval, and radio channel. All apps will run based upon either their initial parameter default values or their values when last configured – see “Configuring your Kookaberry” in next section. Read the prompts on the screen for the correct connectors for the peripherals and connect them to the relevant connectors (P1 to P5) on the back of the Kookaberry.

It is best to make such connections and disconnections when the Kookaberry is OFF as connecting them whilst it is ON sometimes causes it to reset and turn OFF. In certain circumstances it might cause damage to the Kookaberry.

When the Kookaberry is switched on, the menu as shown in the screenshot appears. The _Config app will always appear at the top of the menu and sets up some basic parameters on the Kookaberry that are used by other apps.

To run the _Config app select it from the Kookaberry menu and press button B to start it. 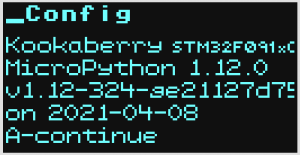 Press Button A to continue to the first configuration parameter (ID) The lines in the display are:

In this instance the ID parameter can be adjusted from 1 to 99 inclusive by pressing the C and D buttons.

Press button B to go to the next parameter (INTV) The rate at which the Kookaberry records a sensor measurement in its USB memory can be varied in this screen.

The inverse of the rate – the interval (INTV) between samples – is what is varied through this screen. The longer the interval, the slower the rate of recording.

The current or default setting is shown as hh:mm:ss, in the example it is 10 seconds.

Pressing the C or D buttons will cycle the INTV setting through a preset range of intervals between 1 second to 24 hours inclusively. The Kookaberry contains a digital packet radio for communicating data between Kookaberries on the same radio channel. The available channels are 0 to 83 inclusive which are selected using buttons C and D.

The radio signal is transmitted in the broadcast mode, This means that all Kookaberries which are set to the same radio channel will receive the same signal. No pairing is required

If “private” one-to-one communication is required between two or more Kookaberries, then set them on the same (but different to the rest) radio channel – eg, 80

The default channel is 83 as shown. The High end of the available channels has been chosen as these are less subject to WiFi interference.

To finish and save the configuration press the A (exit) button and return to the Kookaberry menu. If the _Config app is terminated without pressing button A, for example by pressing reset or removing power, then the _Config setup will not be saved.

The configuration is stored in the ‘Kookapp.cfg’ file in the root folder of the Kookaberry file store. Please do not delete or alter the file as unpredictable operation of other apps may result.