There are no peripherals to set up with this app.

Navigate to the BounceMe app and press Button B to run. Hold the Kookaberry level and read the following to learn what is showing on the screen. What is showing on the screens.

The logging file is called “BouncMe.csv” to keep it separate from other apps.

The file is initialised on app startup.  Thereafter one or more captures are appended to the file.  The file is opened only during capture and closed afterwards thereby minimising the risk of inadvertent loss of data.

The trace will free-run continuously, logging or not.  This is because it auto-zeroes and it takes a couple of seconds to stabilise.  When multiple traces are captured in the logging file they will overlay in Excel so that successive bounces can be compared.

The trace below is a graph of the measured and logged values when dropping the K onto a padded chair from about half a metre.  You can clearly see the free-fall (zero-g) followed by an acceleration impulse and decay oscillation.  The capture period was set to 2 seconds. The graph heading includes the full name from Kappconfig.txt. [The following explanation is taken from a BBC microbit tutorial]

The accelerometer in the Kookaberry measures movement along three axis when being held perfectly flat and level.

Acceleration is what is known as a vector quantity – it has a magnitude (size, length) and a direction. To get the overall magnitude, irrespective of orientation, with only X and Y axes (i.e. we had a 2D accelerometer) the situation would be:

The single vector calculated as above is what is shown on the screen. Gravity’s acceleration at rest is 9.8 meters per second squared when measured in a direct line from your head through your feet when standing vertically.

This should be the value shown on the screen when the Kookaberry is held perfectly flat, but the accelerometer is not perfect and requires calibration. This is what you do when you calibrate the Compass app. 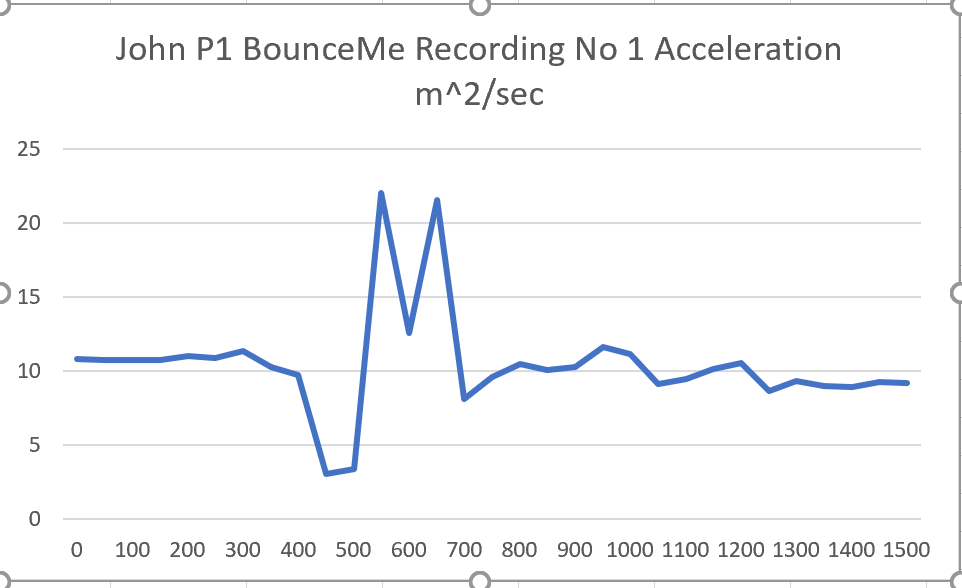